Progressive Supranuclear Palsy (PSP) is a rare brain disorder that affects movement, control of walking (gait) and balance, speech, swallowing, vision, mood and behaviour, and thinking. The disease results from damage to nerve cells in the brain. One of the classic signs of the disease is an inability to aim and move the eyes properly, which individuals may experience as blurring of vision.

A specific part of the brain (the supranuclear region) is affected. Symptoms get worse over time (progressive) and cause weaknesses, altered function, or paralysis in parts of the body (palsy). The disease gets progressively worse, with people usually becoming severely disabled within three to five years of onset.

Diagnosis of PSP is challenging as early symptoms are similar to those of Parkinson’s which may lead to misdiagnosis or delay of an accurate diagnosis, which in turn can then delay appropriate care. PSP can lead to complications such as pneumonia, choking, head injury, and fractures. With good attention to medical and nutritional needs, it is possible for people with PSP to live a decade or more after the first symptoms of the disease.

There can be overlap in symptoms at diagnosis with those of Parkinson’s, but the conditions are different and there can be frustration around lack of recognition and validation. There are currently no treatments to cure or slow progression, however therapies and strategies are available to help people with PSP and their families and carers to make the most of living with the condition.

PSP occurs in only about five or six people per 100 000 (this is similar to the number of people with motor neurone disease). It’s a difficult condition for doctors to diagnose, so the actual number of people with PSP may be higher. Approximately 180 Australians will develop the first signs of PSP each year and currently, around 1300 Australians are living with PSP. Only 22% of people with PSP are given the correct diagnosis in the first 2 years, with many receiving an initial diagnosis of Parkinson’s due to the similarity of symptoms.

PSP was first described and named by doctors in 1964. Before then people with the condition were thought to have Parkinson’s disease. PSP is sometimes called ‘Steele-Richardson-Olszewski syndrome’ after the doctors who first described the condition. Other terms sometimes used for PSP are ‘Richardson’s disease’, ‘PSP-parkinsonism’ or (PSP-P) and ‘pure akinesia with gait freezing’.

Fight Parkinson’s is Australia's leading support organisation with a dedicated commitment to research, education, and support for people with PSP to live full and active lives for as long as possible.

What are the symptoms of PSP?

PSP affects different people in different ways. It has a wide range of symptoms. These get worse over time and can start to have a significant impact after five to six years.

Early symptoms of PSP may include:

Later symptoms of PSP may include:

There are a range of treatments and therapies that can help to manage symptoms and achieve the best possible level of independence and quality of life.

PSP is associated with an over-production of a protein called ‘tau’ in certain areas of the brain. Clumps of tau (called ‘tangles’) build up and these are believed to cause damage to nerve cells. We do not know what causes the overproduction or the build-up of tau, though research is underway. Researchers have found no evidence of any links between PSP and environmental factors such as exposure to toxins or chemicals. Research is ongoing in Australia and overseas. Contact Fight Parkinson’s or your neurologist for further information about participating in PSP studies.

People with PSP usually start to have symptoms between the ages of 60 and 70. PSP can affect men and women of all nationalities and lifestyles.

Is PSP inherited or passed on through families?

PSP does not run in families. However, a common genetic type has been found to be more common in people with PSP than the rest of the population. In other words, there may be some genetic susceptibility that makes some people more at risk than others, but PSP rarely affects more than one person in a family.

Can it be treated?

Treatments and therapies are available to help manage symptoms of PSP, however, there is no cure and we do not know of any way of slowing its progression. It’s important that people with PSP see a neurologist, preferably one with expertise in movement disorders such as PSP and Parkinson’s.

PSP cannot be cured, so everyone with PSP experiences deterioration prior to death. As the condition progresses, people with PSP are at risk of developing serious complications, such as pneumonia or choking caused by swallowing difficulties or head injury caused by falls. These complications can be fatal.

The rate of progression with PSP varies significantly from person to person. The average life expectancy after diagnosis is approximately seven years, which means that half the people with PSP will live longer, some up to 15 years, and half will live shorter, even as short as 3 years. Research into PSP is currently underway, giving us hope for the future, particularly in relation to more effective symptom management.

How is PSP diagnosed?

PSP is difficult to diagnose. There are no blood tests or brain scans that can diagnose it, although tests and scans are commonly used to rule out other conditions. It is common for people with early symptoms of PSP to be misdiagnosed with Parkinson’s due to similar symptoms, such as slowness of movement. Two of the key signs indicating the need to review a diagnosis of Parkinson’s and consider PSP are a limited response to Parkinson’s medication, and changes in the movement of the eyes.

Some people with PSP are also misdiagnosed with dementia due to problems they may experience with slowness of thinking. Because PSP is rare, many doctors are not even aware of the condition and do not know what symptoms to look for, although this situation is improving. It is important to see a neurologist, who is a doctor specialising in brain conditions. People with PSP should visit their neurologist regularly for ongoing treatment and advice. If possible, see a neurologist with expertise in movement disorders, as they are more likely to be up-to-date with the latest advances in treatment and management.

People may experience a range of feelings after being diagnosed with PSP. Most people experience a feeling of grief, which may include fear, sadness, denial, anger or concern for the future. Some people may experience a feeling of relief at having a name for the difficulties they have been experiencing after searching so long for answers. It is important to have a safe space in which to work through these feelings of grief and be aware that those around you will be experiencing the same range of emotions. Speaking to a counsellor can help you to come to terms with your feelings and make meaning of the situation. Getting information and support can help you to adjust to the diagnosis and begin to make changes that will help with the daily management of the condition. Remember, you are not alone and help is available. The best place to start is by contacting Fight Parkinson’s.

Where can I go for further information and support?

PSP is a complex and challenging condition. It is important to get help and to communicate your needs. Fight Parkinson’s provides information and support for people with PSP and their families and carers. We also provide a free telephone interpreter service for people who speak a language other than English.

There are a range of services available to assist people with daily living and to help members of the community to make the most of living with an illness or disability, including:

Fight Parkinson’s holds a bi-monthly online support group for people living with PSP. If you are interested in attending or would like to know more, please call us on 03 8809 0400 or email info@fightparkinsons.org.au.

YOU ARE NOT ALONE

No-one has to face PSP alone.

Our Health Team offers national specialist support for individuals and families and can help with information on symptom management, services, health-related benefits and entitlements and everyday living. As families and people affected by PSP often come into contact with health professionals with no or limited knowledge of their condition, we can also provide specific information for, and advocate on your behalf, to medical and healthcare professionals. This service is available by phoning 03 8809 0400 from 9am – 5pm on weekdays. 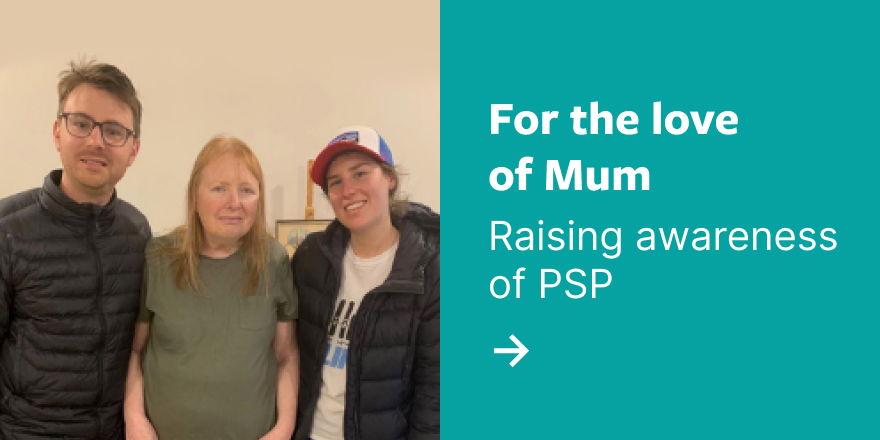 Many of us dream about being ‘lucky’ enough to win Tattslotto. The chances are so slim, but there is a chance. But what if those odds are reversed? It’s how a PSP diagnosis was described to the Manolitsas family - like winning Tattslotto, but in reverse.

A musical ‘dramedy’ streaming in Australia on Stan features a main character with PSP. Zoey's Extraordinary Playlist is about a young woman who starts hallucinating – hearing people’s inner-most thoughts in song - after having an MRI. This allows her to reconnect with her father, who has PSP and is unable to communicate.

The series follows Zoey as she struggles with her new ‘superpower’, fearing it may be a symptom of her own potential impending neurological disease diagnosis, while also using it to communicate with her father again and see the world in a whole new light. The show was created by Austin Winsberg, who was inspired to write it after his father died in 2011 following a battle with PSP. “For the last six months that my dad was alive, we didn’t really know how much he was processing, if he was processing what was really going on, in his brain,” Winsberg told US media.

Fight Parkinson’s provides a range of resources and publications that can assist people living with PSP, their families and carers to feel more informed about the condition. We are also committed to funding research that will provide life quality outcomes for people living with PSP and ultimately, find a cure.

People living with Atypical Parkinson’s – and their carers – need to continue to take precautions to prevent exposure to the coronavirus. This is because COVID-19 can infect the entire respiratory system and is likely to cause pneumonia, especially in people living with pre-existing conditions.

This can cause complications for people with Atypical Parkinson’s, particularly those with more advanced symptoms, which may include difficulty swallowing or coughing up secretions, which can collect in the throat causing a gurgly voice or drip into the lungs causing chest infection and sometimes pneumonia.

In addition, a person with Atypical Parkinson’s may have some difficulties coughing up the lung’s secretions, allowing the secretions to fill spaces in the lungs where air should be flowing, reducing the ability of oxygen to reach the tissues.

Keep track of all the latest Victorian updates via the Department of Health and Human Services.

People with PSP – as well as their carers – were eligible for COVID-19 vaccination in Stage 1B, which commenced roll-out in early 2021.

This recommendation is given because of the overwhelming benefits, with the risks being the same for people living with Parkinson’s as with the aged matched general population.

Fight Parkinson’s is one of 12 associations working as a single international body to deliver an increased focus into PSP|CBD research.

PROMOTUS, the PSP|CBD Global Alliance was formed in June 2019 to:

The information here is presented as a guide; it is important to discuss all symptoms and management strategies with your neurologist and other health professionals.